You are here: Home / Chevrolet / How Did This Happen? 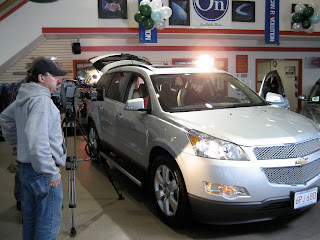 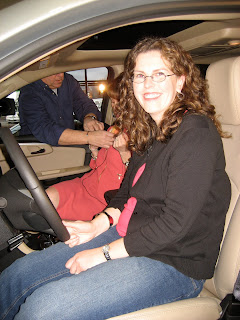 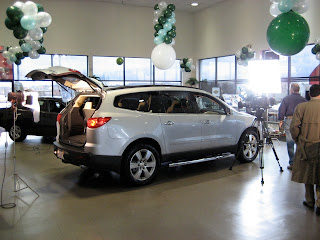 One sunny day in May of 2004, while listening to MIX 98.5 on the way to work in Sudbury, I decided to call in and press my luck on a competition they were having. The 98th caller got the chance to say “MIX 98.5 IT’S MY MIX” as fast as they could in ten seconds. So I decided to call. As I sat and listened to them take the 98th caller, my cell phone was still ringing…and they lost the caller they were trying to speak with. The next thing I knew, I was talking to Lander and Kelly about my upcoming wedding and how I could use a few hundred to go toward the wedding expenses. So that’s when I won $800 bucks on the radio…

I won some door prizes at teacher conferences along the way, I won a few bucks on some scratch tickets, but never more than $40. I won a Movie Night Basket at a staff Christmas Party once, and let’s not forget this year’s BIT Auction at Gillette Stadium where I won the Kids’ Reading Nook Raffle, an infant travel system and some cute picture frames!

One lovely fall afternoon, while wasting some precious time on Facebook, I saw that some of my friends recently became fans of WCVB. So I said to myself, “hey, I go to their site every day for news updates, I should be their friend.” After clicking “Become A Fan”, I clicked on over to another favorite website of mine, bostonchannel.com. Now this is where I see a big blue advertisement saying, “Win A Trip to the Ellen Show! Click Here!” Hell ya, she’s funny as hell-I’d love to go see Ellen. So I fill out my name, email address, phone numbers, etc., thinking nothing of it. “Like, ya Anne, how many people do you think filled this form out? Get on with your life and get off the computer!”

So I remember lying in bed one night, probably watching Dancing with the Stars, or some other favorite ABC show, and a commercial comes on saying, “Would you like to win a trip to Los Angeles to see a live taping of the Ellen Show?” Go to bostonchannel.com for your chance to win!” I remember turning to Chris and saying, “Oh I did that! I’m gonna win!” He didn’t even acknowledge me I’m sure, and kept on reading his book while I blabbered on ….

So around about September 24th or so, I come home from work as usual. I picked up the house line (a rare occurrence in our house) and hear that beeping sound telling me I have a message. Hmmm, who could it be? So I call into my messages and heard some lovely woman stating something about WCVB…..and something about a trip to L.A. to see Ellen! Well, I just about lost it. COMPLETELY. I was like, “NO, I didn’t hear any of that right…..maybe I won some Red Sox tickets? Let me listen again.” Nope, she said it as clear as a bell….”You’ve won a trip to see the Ellen Degeneres Show in L.A……..please call me back at……”

I went bonkers. Are you SH*TT*NG ME? I WON? I was screaming, jumping up and down with Emily and Aidan both watching me. Emily starts jumping up and down too (one of her favorite past times for those of you who know her), and she continues to jump and scream with me until she pees her pants on the kitchen floor! I’m screaming, “I won a trip to L.A!” and she’s just jumping along with me!

I called Chris, Mom, Kath, Derek and Lynne and proceeded to tell them all that I won a trip to see Ellen! The funny part is that no one believed me! “Did you read the fine print?, Are you sure it’s not a hoax?” Hilarious. I’m telling everyone, “YES, I spoke with Andrea from channel 5 and she’s going to book everything for us and we have to go SOON!”

We finalized dates, headed out to CA. on Oct. 16th for a 5 day trip to L.A. Chris and I had the time of our lives! We had a limo waiting for us at LAX who took us to West Hollywood to stay with my dear friend Rye for 2 nights. We had a blast. He showed us the sites, took us to Santa Monica, Rodeo Drive, Pinkberry – you name it – we did it! It was awesome. Then we spent the following 2 nights at Sheraton Universal, which was awesome! We saw Tyra Banks walking through the lobby one evening with her entourage from America’s Next Top Model. We also saw the 4 year old hip hop dancer who appeared as a guest on our Ellen taping. We went up to Universal, rented a Mustang and drove up to Malibu and enjoyed the 88 degree weather. We had such good times, good food and good wine! It was the best weekend ever. Not to mention the front row seats and star treatment at the Ellen Show!

So when we got back from L.A., I was contacted again by WCVB. “So how was your trip? Would you be interested in the possible opportunity of a new car?” I was like, “huh?” Did I just hear that right? I’m like “YES!” So we kept in touch and I looked back at all my L.A. trip paperwork. The top says, “The Chevy Equinox Ellen Sweepstakes” I had always wondered what Chevy had to do with it, but when Ellen didn’t give me a car, I thought my chances were over. Well, they weren’t. A media outlet from NYC started contacting me about the possibility of creating some commercials and online vignettes of me in a Chevy.  Social media, yes please!   Am I really going to get a new car?  So then a meeting was set for the end of November at WCVB. “Bring the kids, let’s sit down and talk about this, etc.” A lot of the people I told had doubts-“they’re NOT gonna give you a car too, Anne!”

So we chatted, the marketing people spoke about their ideas and asked if I would be interested. “Hmmm, let me think about this again….YES!” So I went ahead and asked the bold question, “Will there be compensation for appearing on t.v. and blogging and doing all this work?” My new friend Randy replies, “That’s something the legal department at Chevy is trying to figure out and it would probably be a vehicle of some sort!” BRING IT ON! We chatted some more and I spoke about my family. I even explained to them all that a few days after returning from my Ellen trip I learned I was EXPECTING #3! (I got lucky again folks! I swear!) So then we chatted about how the Traverse – Chevy’s new crossover vehicle – would be perfect for our growing family.

So there ya have it. That is how it all happened. Keep an eye out for me on bostonchannel.com and my big debut this Sunday, March 7th, 2010, as my first Chevy commercial airs on WCVB during the Oscars.

*And just in case you missed it, here’s our very first Chevy Commercial!*